Little information is known about the definitive version of the DBS designed by William Towns. But it is believed that at least one prototype was built before the unveiling of the first official car DBS/5001/R.  It is this car (chassis MP 227/1) which was presented to the London press at Blenheim Palace on September 25th 1967 and which was the subject of numerous press articles in late 1967 and early 1968, most notably in Autocar and Motor magazines.  The prototype had two registration numbers, FEB 1 and WKX 2E and is thought to no longer exist.

- DBS:5001/R, was originally registered as YKX 2F, still exists and is in the USA

- DBS/5002/R, was originally registered as BPP 6F then 222 HOH, before being converted as a prototype for the future DBS V8

- DBS/5005/R was sold to a private owner who kept her until 1977.  Produced in Old English White and equipped with a Webasto sun roof (a factory optional extra), she was sold at auction by Barons on December 7th 2010 by her owner since 1982 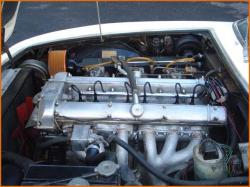